Lakeland senior Kyle Sierota with the wrist shot for the Eagles. (Special for The Spinal Column Newsweekly/CHRIS WALL)

The Lakes Valley Conference hockey season has been a series of battles on the ice with many games decided in the third period. Huron Valley rivals Milford Mavericks and Lakeland Eagles shared the LVC championship this year with records of 5-2-0-1.

Milford head coach Dennis Gagnon and Lakeland head coach Tim Ronayne were proud of their team‘s efforts in a competitive league that featured many high-scoring games. 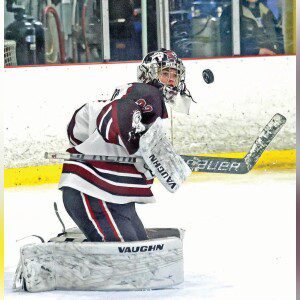 Milford sophomore guard Cooper Langley with his mask backing up for the Mavericks. (Special for The Spinal Column Newsweekly/CHRIS WALL)