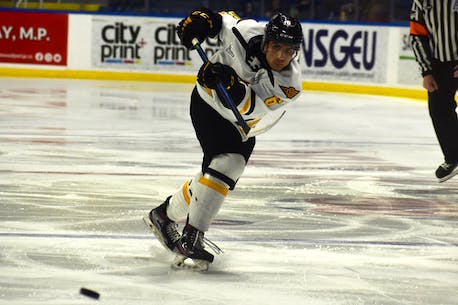 The Eagles’ first trade of the day saw goaltender Rémi Delafontaine traded to the Shawinigan Cataractes for a 2023 third-round pick, originally owned by Blainville-Boisbriand, and a 2024 seventh-round pick.

Cape Breton then sent forward Matthew MacDonald to the Baie-Comeau Drakkar in exchange for an eighth-round pick in 2023.

The club concluded the trade period by entering into two separate prospect deals with the Acadie-Bathurst Titan.

The third-round pick going to the Titan was originally acquired by the Eagles as part of the deal for Delafontaine.

In Delafontaine’s case, Eagles general manager Sylvain Couturier said the decision to trade him was more important than hockey.

“Our intention was not to trade Remi, but due to a family issue – his father is ill – we thought it was the right thing to do,” he said.

“These young people are coming to Sydney and hockey is obviously the reason they come here, but there are more important things in life when it comes to family and sick people. I think you have to do the right thing and that’s what we did by trading him.

Couturier confirmed that Delafontaine requested a trade for this reason, but noted that he told the team that if they could not accommodate him via a trade, he would stay with the club.

“He wants to be closer to his father and that’s understandable. It was really about doing the right thing. We are happy for him and that he is closer to his family and we wish him well, he is a great boy.

Delafontaine, 18, was acquired by the Eagles on January 25, 2021, as part of a deal with the Chicoutimi Saguenéens for forward Félix Lafrance. In his rookie season with the team, the Sherbrooke, Que., product went 7-20-1-2 with a 4.79 goals-against average and .868 save percentage.

Delafontaine played 32 games for the club in the 2021-22 season against his counterpart Nicolas Ruccia who played 40 games.

MacDonald, 18, was traded to Cape Breton on Jan. 22, 2021, as part of a deal with Shawinigan for prospect Alexis Bonefon, who won the President Cup with the Cataractes last year.

In 55 games in his first full season with the team, the Halifax product had four goals and 14 points, as well as 28 penalty minutes and a minus-26 differential.

Couturier said MacDonald fell victim to the numbers game on the roster and the emergence of 10th-round pick Angelo Fullerton, who Couturier said will start the season in Cape Breton.

“Fullerton really impressed us at camp from day one and when you have a 17-year-old like him who is 6-foot-2 and 200 pounds who can skate and play the same kind of game that Matt was playing, Matt became the strange man,” he said.

“Baie-Comeau showed interest and we had the choice we had for him and we will move on.

Henderson, 17, was a fifth-round pick by Acadie-Bathurst in 2021. He played 20 games with the Titan last season, registering one goal and five points. The five-foot-10, 201-pound New Minas, NS product also played in 11 games for the Valley Wildcats of the Maritime Junior Hockey League, scoring two goals and three points.

Couturier said Henderson will start the season at Valley, but the club will closely monitor his progress throughout the season.

“He’s a big boy, he’s not afraid of anything, he plays hard and plays good old hockey and that’s what we like about him,” he said. “He will be in Sydney as soon as possible and we think it was a good bank for us to have him.”

Couturier, who drafted both Henderson and Arnold with the Titan, said Arnold is a right-hander and sees the deal as good for the future.

“He will come here and challenge for his ice time,” he said. “He’s one of those guys who is smart with the puck and makes good decisions with the puck. “

DiMattia and Lyons were both on loan for their respective clubs’ training camps before the swap. Lyon was cut by the Wildcats on Saturday.

DiMattia played 31 games with the MHL’s Grand Falls Rapids last season, posting a 12-16-1-1 record with a 3.80 goals-against average and .895 save percentage.

The Halifax product was selected in the ninth round, 152nd overall, by Moncton in the 2019 QMJHL Entry Draft.

Couturier confirmed that DiMattia will start the season with the team, noting that the 19-year-old “deserves his break”.

“He will come here and challenge (Nicolas) Ruccia and I think we have a good goalkeeping pair this year,” Couturier said. “He’s proven himself in Junior A and I think he’s been the best goaltender in the league for the last three years.

In other Eagles news, Couturier said the team will place 19-year-old Carter McCluskey on waivers Monday. He said that, like MacDonald, McCluskey fell victim to the numbers game as a forward.

Meet the 22 players from the United States national team that coach Vlatko Andonovski brought to Tokyo for the Olympics. Teams can only field 18 players per match: Goalkeepers Adrianna Franch, left, and Alyssa Naeher celebrate the United States’ victory in the Women’s World Cup semi-final over England outside of Lyon, France, in 2019. (Francisco […]

May 02, 2022 Welcome to Wolves Insider, brought to you by Rivers Casino: the weekly report that brings you the latest Chicago Wolves news as the Macgregor Kilpatrick Trophy winners head into the playoffs and prepare to challenge for the fifth league championship in the league. ‘organization. LET THE CALDER CUP HUNT BEGIN! For the […]

Hockey is back in Raleigh. The Carolina Hurricanes open their four-game preseason roster Tuesday night at PNC Arena, welcoming the team that knocked them out of last year’s playoffs, the Tampa Bay Lightning. “This is the first game,” said head coach Rod Brind’Amour. “Now we can get a feel for some of the players and […]